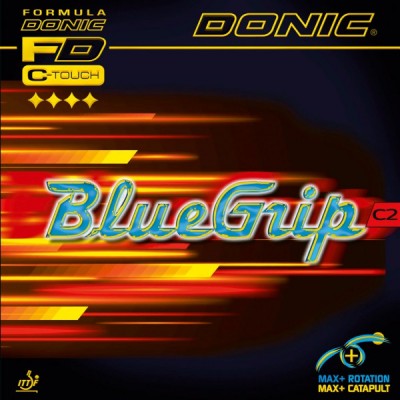 Uncompromising offensive players that rely on speed and spin. Powerful catapult effect, incredibly spinny. Technology: Full tension sponge, tacky topsheet. Slightly softer and significantly lighter than the C1 with values of 55° and 80 g respectively. THE FUTURE IS ALREADY HERE Versions V1 and R1 of the BlueGrip were already a revolution: The best of both worlds in one rubber! Now DONIC is taking this development one step further. With the BlueGrip C1 and C2, DONIC has added two versions to this series that outshine everything that has come before them. The following also applies to these two versions: The DONIC BlueGrip has a tacky, Chinese-style topsheet, along with a sponge with a powerful catapult effect and incredible dynamic properties, the likes of which we only see from rubbers from Japan or Germany. But there is more – these dynamic properties have now been increased even further. With a sponge hardness of 60°, the C1 version gives the ball an even greater arc when playing topspin strokes and provides even more speed, while the C2 has a slightly softer sponge and subtle differences in the pimple geometry, all of which provides further support for the softer playing feel.