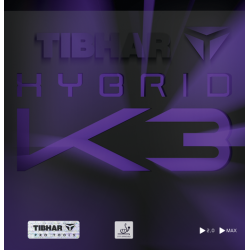 The rubber TIBHAR Hybrid K3 is the result of a team collaboration with our top players Shang Kun, Cédric Nuytinck and Darko Jorgic. Three excellent players, each one of them has his own playing style, shared experiences and ideas in order to create an exceptional rubber combining enormous spin and optimal speed.

They faced a big challenge though, since Hybrid K3’s enormous tackiness reduces the speed at longer ball contact. By developing a special combination of sponge and pimple in rubber, we managed to direct the energy transfer forward despite enormous grip and achieve high-speed values.